How to keep your audience from closing out of your videos?

To improve the watch time, the best thing to do is find a scenario that will captivate your audience until the end of the video.  Of course, this is easier said than done!  To help give you some inspiration, here are some very creative ideas that we found can help significantly improve the watch time of your videos (average view duration) and even encourage people to re-watch some of your content.

There are several channels that have already started using this tactic in their videos.  For example, “The YouTube video Electric Guitar” allows viewers to play the guitar by clicking on annotations that redirect them to different notes within the same video.

More recently, Pvnova used the same the concept with his video “Evolution of Get Lucky” which allowed viewers to skip through the video and listen to Daft Punk’s song according to the music styles of different time periods.  This video was such a success that it exceeded 2.5 million views in just 2 weeks and to this day it still appears on the first page of YouTube when you search "Get Lucky" (out of 7,580,000 results).

Why does this concept enable you to improve your watch time?

Because most users will want to play! With these types of annotations, viewers will often revisit certain sections of the video several times, staying longer than the duration of the video itself (and thus having an average percentage viewed that is greater than 100%). For instance, in the case of Pvnova, they might listen to all the music styles and then want to go back and compare the music style of the 50s to that of the 80s.

To obtain similar results, it is imperative that the video is made up of strong clips that the audience will want to go back and re-watch: if you see that a certain part of the video that is really popular among viewers, don’t forget to put an extra annotation at the end of the video that leads back to this section.

2. Create a mystery for your subscribers and give them clues to help them solve it: Jojo Bernard

Often people watch a YouTube video only once and never come back to it.  In order to get viewers to revisit some of the older videos in his catalogue, Jojo Bernard published an unlisted video entitled "Mystery Video" and hid the link to it in the annotation of an existing video.  Through bulletins on his channel’s news feed, Jojo periodically gave clues to help subscribers find which video it was hidden in.

Thanks to the clues, subscribers were eventually able to find the video that contained the mystery video link. However, viewers didn’t know what moment the spotlight annotation would appear so they had to watch the whole video to try and find it! This type of game works great to improve your watch time and also has the added bonus of keeping people coming back to your channel.

3. Hide something in the video, and make subscribers watch the entire video to try to find it: Ray William Johnson

This concept has excellent results because it makes viewers watch the video attentively all the way to the end!

In each of your videos, include a “call to action” that will prompt viewers to search for something hidden even within the video itself.

YouTuber Ray William Johnson uses this approach regularly in his videos, asking his viewers out loud if they can find the hidden image that he’s inserted somewhere in to the video. Example: https://www.youtube.com/watch?v=xPFDkGYpBts&t=3m58s.

Keep thinking of ways that you can get your subscribers to interact with the video: moving around objects in the background, hiding clues to a mystery, or even adding flashbacks to one of your previous videos to encourage them to watch it again. 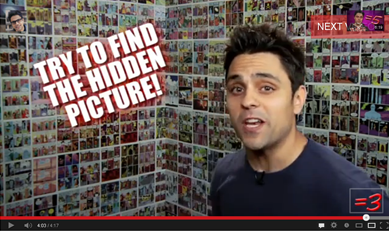 4. Finally, to prolong the amount of time visitors spend on your channel, use annotations that send them to your playlists

The more that visitors watch your videos, the more time they will spend on your channel, and the better your watch time will be overall.

When visitors click on your annotation and find themselves on a video within a playlist, they will have the option (to the right of the screen) to navigate to other videos in your playlist or to see the next video in the playlist that will start automatically at the end of the video they’re watching.

Encourage viewers to watch videos inside a playlist to increase the number of videos viewed by unique visitors.